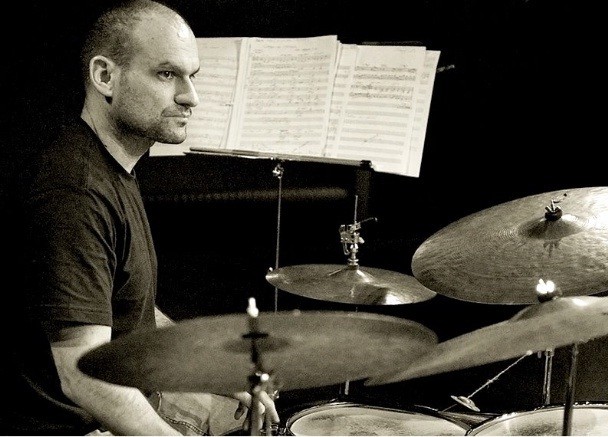 Bruno Pedroso was born in 1969.He began to study music in 1987. First particular title with established musicians on the national scene ( José Salgueiro, Henry de Sousa , Manuel Costa Reis ) and then attended at the Academy of Music Amateurs and Jazz School Hot Clube in Portugal .

At the end of the 90s, he started  working as a freelancer, first with the pop band Heróis do Mar , later on with Mler if Dada, where he stayed for two years and recorded the second album.

In the 90th he began fulfilling his compulsory military service in the Army Light Orchestra. In this time ,he was studying with jazz drummer Allan Dawson , renowned educator , teacher during 18 years at the Berklee College of Music in Boston , USA and also studied with legends of  jazz such as Clark Terry , Sir Roland Hanna , Rufus Reid , Bill Pierce.

Bruno Pedroso integrated the band Dulce Pontes , recording CDs " Lusitania " and "Ao vivo no Coliseu do Porto" . He was also a part of the group Plopoplot Pot ( led by musician and composer Nuno Rebelo ) and Idéfix ( Sergio Pelagio ), with whom he recorded the albums.

At the end of the first half of the decade ,Bruno Pedroso was a part of the orchestra "Som do Mundo"led by Laurent Filipe. The effect of participation there was recording the CD with Carlos Martins at the concerts, both: nationally and abroad. He had the fortune to record with well - known singers like: Mary John , Elizabeth Campelo and Anabela,with the band Ritual Tejo, record a CD with the trio "Lugar da desordem", saxophonist Paulo Curado and visit Africa to play around at festivals with bassist Carlos Barretto, as well.

At the end of the decade , feeling the need of a musical recycling ,Bruno Pedroso remained an half a year in New York , studying at the school " Drummers Collective " There he had opportunity to meet the most important drummers of the world jazz scene, as Jordi Rossi , Jim Chapin , Carl Allen , Leon Parker , Ralph Peterson Jr. , Adam Nussbaum , Steve Berrios , Kim Plainfield , Bobby Sanabria.

Ze Eduardo: "A jazzar no cinema português", "The Jazzar no Zeca"

Paulo Curado and place of Disorder: "The bird, the breeze, and Mr. Filiano"