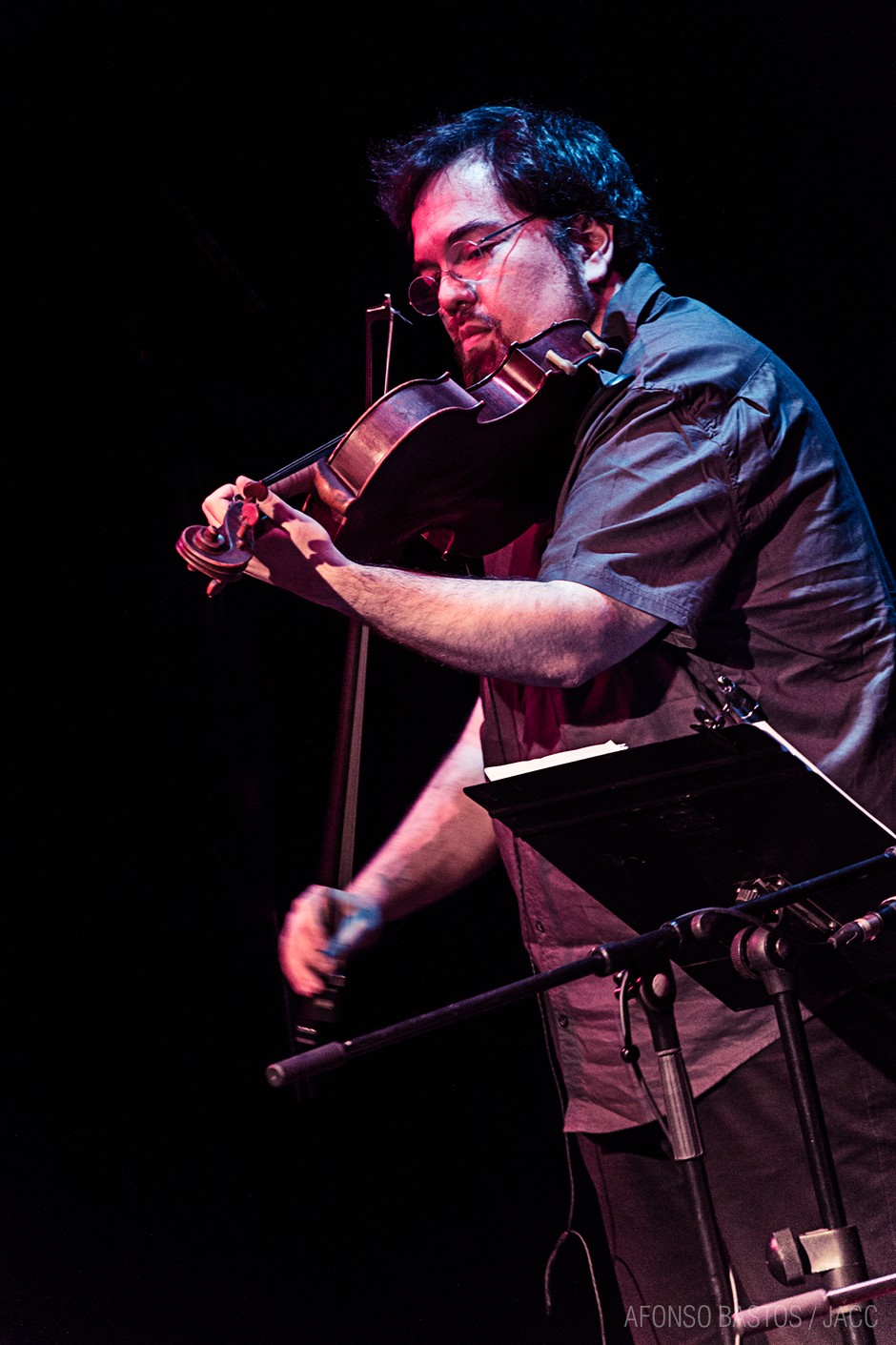 José Valente - awarded artist with "The Hannah S. and Samuel A. Cohn Memorial Foundation Endowed Fellowship". Born in Porto, Portugal. Graduated classical viola from the Kaerntner Landes Konservatorium in Austria with the highest grade. In 2006, received a scholarship to study at the internationally acclaimed New School for Jazz and Contemporary Music in New York, where he graduated "with honors" in 2009. Among others, he studied with: Ana Bela Chaves, Prof. Brian Finlayson, Prof. Mathias Buchholz, Prof. Sebastian Burger, Jane Ira Bloom, Reggie Workman, Aaron Goldberg, Junior Mance, Bernard Purdie, Christian Howes, Mark Feldman, and Jim Black. Had the opportunity to work with, among others, Grammy award winner Paquito d'Rivera, Joshua Redman, Dave Douglas, Hank Roberts, Don Byron, classical indian music masters Shakir Kahn, Vikas Tripathi, galizian awarded pianist Alberto Conde, Jason Kao Hwang, Daniel Levin,. He played live at the RTLs televised broadcast of the ski jumping world championship in Planiza, Slovenia; at the Olympia Park and the Prinzregententheater in Munich; and at the ZDF television show Wetten das with broadcast in Germany, Austria and Switzerland. He also performed in many clubs and halls, including the world famous Carnegie Hall (featured soloist); Dizzy's Club at Lincoln Center; Sweet Rhythm; Union Square Park (Solo concert); Banff Summer Festival; Paredes de Coura Music Festival; 16ª Art Biennal of Cerveira; XIII and XIV Cultural Week of the University of Coimbra; Calouste Gulbenkian Foundation; XI Encontros Internacionais de Jazz de Coimbra; among others. He has been in several radio and TV broadcasts, presenting his music, such as: WGBO Radio; RTP2; Antena 2; Antena 3; Banff local radio; and was interviewed/wrote for magazines such as, Jazz.PT; MACA magazine; Revista Via Latina. Lectured conferences at the Royal College for the Arts of the University of Coimbra; Architecture Faculty of the University of Oporto; Escola Superior de Educação de Coimbra; and Post-ip'13 at the Departament for Music at the University of Aveiro. In May 2009, he received a scholarship to participate in the BANFF WORKSHOP FOR JAZZ AND CREATIVE MUSIC, hosted by Dave Douglas, and performed at the Banff Summer Festival. In July 2009 he received an honorary mention for his piece "Sem Abrigo" in the composition competition PRÉMIO DE COMPOSIÇÃO LOPES-GRAÇA 2009. He participated in the festival "Serralves em Festa 2010" as winner of the artistic competition with two projects: "A Conversa" and "Vamos Tocar". He is the creator of the concept EXPERIENCES OF TODAY and in January 2011, he released together with Associação Arte à Parte (www.arteaparte.pt), the album "José Valente and EXPERIENCES OF TODAY". In 2011, he participated in the "Improvisações/Colaborações" workshops, organized by Serralves Foundation. He performed with Jason Kao Hwang, Zeena Parkins and William Winnant. His composition "Amarelo Schwartz" is part of the exposition "MONO" organized by the Círculo de Artes Plásticas de Coimbra (CAPC). He premiered at the University of Coimbra, his composition "Invisible Cities", based on the book with the same name by Italo Calvino, in the conference "Read, Watch and Liston to Italo Calvino", together with Dtr. Rita Marnoto and Arquitecht Nuno Grande. He composed and performed live the soundtrack for MARIONET's direction of the Theater play of "Calculus" by Carl Djerassi. He collaborates often with brasilien visual artist Chico Santos. His music was soundtrack in films like "Invasão, Cariri", "Invasão, Pampas", "Invasão | Oceano Indico" by Chico Santos; or "Nocturna" by Francisco Carvalho. He was invited to do an artisitic residency at the Djerassi Residency Artists Program in San Francisco, USA in 2012, where he composed and performed "Invasão | Invasion". He was the first portuguese artist to visit this program. He also performed in New York with Daniel Levin, Jason Kao Hwang and Steven Lugerner. He composed a "Sonata for Viola and Empty Cube", comission by EMPTY CUBE project (curator: João Silvério), and premiered the piece at the gallery Appleton Square, in Lisbon. He is also responsible for the soundtrack of the documentary film "SAGRADO" by Ruptura Silenciosa, a project lead by Arquitecht Nuno Grande about the Igreja do Sagrado Coração de Jesus (Sacred Hart of Jesus Church) from Architects Nuno Portas and Teotónio Pereira. He is the composer of the live soundtrack of "As Fabulosas Fábulas em Terra de Nenhures" a work by writer and artist Marta Bernardes, commissioned and premiered at the Calouste Gulbenkian Fundation, in Lisbon, June 2014. He was recently invited to be a featured soloist in the "HUMAN EVOLUTION PROJECT" directed by Alberto Conde. He's doing a doctorate degree at the University of Coimbra in Contemporary Art, under the guidance of painter António Olaio. José Valente is currently represented by Murmurio Booking. www.josevalente.com www.josevalente.bandcamp.com www.musicapensar.wordpress.com