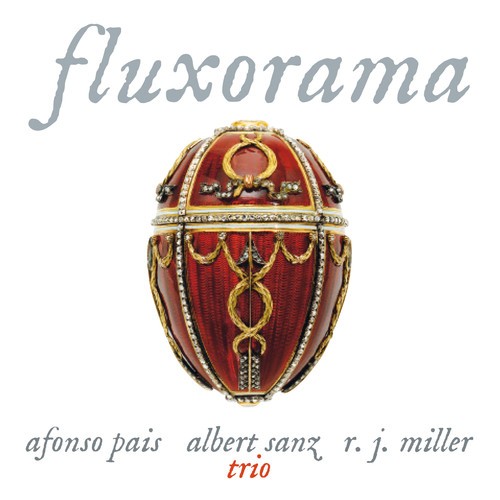 A spiral that spins

It is with a set of instruments identified with the historical Jimmy Smith that deals the album "Fluxorama", now on
public display. Nor the fact that the repertoire used is, precisely, the heritage of jazz, makes this not a step forward
in the endless pursuit that we call music.

An established guitarist who began school in the Hot Club in mid-December 1990 and in 2000 obtained a degree in
Performance from Berklee College of Music, later joined the prestigious New School University's Mannes College
of Music in New York, Afonso Pais quickly became one of the most important jazz musicians nationwide. His jazz
has a universal dimension, incorporating musical ideas from other related areas, with emphasis on Brazilian
popular music.

With two previous CDs published its new "Fluxorama," an edition of JACC Records, was presented live at the
festival jazz.pt with certain characteristics that distinguish it, including the format, with a trio of guitar, organ (Albert
Sanz) and drums (RJ Miller) reminding us of the meetings of Jimmy Smith with Kenny Burrell, and the repertoire,
which is based on the interpretation of "standards" and themes of the great names in jazz history. "This album
reflects my respect for the legacy of all interpreters and improvisers on my instrument, the guitar, especially Wes
Montgomery and Jim Hall, who are undoubtedly my references. It was recorded at the first or second "takes", and the majority of the themes are ballads ... The standards included arise as platforms for musical expression,
interaction among musicians", he explains.

Although this is the first disc of the trio, he had already been working, for more than 10 years, with the Spanish
Albert Sanz, his former classmate in the U.S., as well as RJ Miller. Why only now? "Admittedly, our complicity in
music has some time now, but these things are like this – they happen when they happen. We had already played
on several sites with different configurations and in various contexts. The idea of recording an album has always
existed but only recently it has proved as simple to implement and, moreover, it is only recently that Albert began to
be able to record at home: a huge advantage."

If Sanz was an obvious partner for Hammond, also the drummer was handpicked, "Albert then studied classical
piano and jazz, and heard a lot of BPM at its technical training: César Camargo with Elis Regina, Milton
Nascimento, etc…He’s an improviser of extreme originality, and I have no doubt he will always be held to a deeply
artistic and subtle way of expressing himself musically. RJ Miller studied at the New School, a little after I graduated
the same university. We didn’t coexist temporally, but as I extended my stay in New York for three more years we
had many sessions together with other musicians, including Albert. He is a drummer with a broad vision of what can
be a groove, either swing or another. This view reminds me of very unique historical drummers like Paul Motian, Ed
Blackwell and Billy Higgins. Not in the achievement itself, but in terms of concept."

With rich experience in the Mecca of jazz, Afonso Pais is well aware that there is an exchange between jazz
scenes of Lisbon and New York and what is his role in this movement, towards and from, back and forth. Hence the
question: what is your personal/musical relationship with some of the many good musicians you knew the other
side of the Atlantic? "The vast majority of musicians "passed" by NI, instead of "stayed" in NI. The city itself
encourages, nay, requires transience. The phrase "too much of a good thing" could have been invented there, and I
think, above all, "good" expresses the intensity and urgency, like a spiral that spins throwing away the outer layer.
In this case, those who are new or almost new arrivals. Since I’ve returned to Lisbon I have met again some of the
musicians I knew there, and met new others through friends or colleagues. The exchange, in my experience, is
often a combination of circumstances, such as the common situation of an American or European musician based
in NI passing by, for any reason, and that geographical proximity allowing the musical encounter."

At the time of their conversion to disc, this trio with Hammond organ is a musical project that has reached maturity,
or is yet a way to explore and develop? "All ideas are to be explored in all the ways possible, always, and I hope to
play many times with this group. It happens with any project: I see no point of arrival, and departure hardly.. That
does not mean that ideas do not undergo metamorphosis that make them distinctive as to be unrecognizable. If the
process of metamorphosis is organic it’s «natural» that the order of events is this."