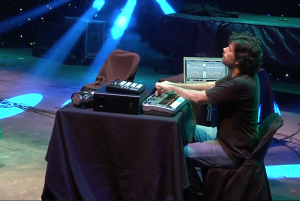 He began his musical studies at the Jazz School of Barreiro and afterward, he used to play at the Hot Club with Bruno Santos, Filipe Melo, and Bernardo Moreira etc.

In England, he studied electronic music and sound design under the guidance of  Julio D'escrivan and in the same moment jazz and improvisation with Kevin Flanagan, as well.

In Portugal, deepened guitar studies with Mario Delgado. At school he studied harmony with J. B. Pedro in theJazz Madaleno.and also participated in workshops for film music with Bruce Pennycook.

As a composer and sound designer, collaborated with choreographer Ligia Teixeira and digital artist Ivan Franco. Also in 2008, participated in the festival Monstra animation with a soundtrack for the short film "Fantasmagorie" and got a selected electroacoustic installation "Soundwalk", at the Festival Musica Viva composition.